Wonder of the wonders in the Historical Center! This is the first time that the light at the end of the tunnel can at least be seen, for there is a long way to go, but at least something has moved. Well, Bucharest?s anniversary also gave the people in charge a kick in their respectable ass, probably, since we even saw actors dressed in old costumes, medieval music was oozing down the new pavement, even the co-inhabitant nationality from around the area had changed the brown of cheeks into pink.
One or two streets would be ready and the Bucharest dream to have a street as Vaci Utca from Budapest or Republicii from Brasov, a bit closer to us can be slightly seen.
You can walk and walk, but at some point we all remember that we are not immortal…From ashes to ashes, dust to dust we must, either we want it or not, feed our body as well, not only our soul. Bless me!, in the historical center this is much worse. Monaco Lounge disappeared, not that it was a big hit in many aspects, but it was still a decent place. In Smardan however, with my feet tired of two "rounds" of the center where I suddenly lost my appetite in a few places for sanitary reasons, I saw Charme. It looks modern and pleasant on the outside, modern and pleasant on the inside. But the chairs?reminded me of children swings that we used to manufacture in the high school?s workshops; they were as uncomfortable, each rest of the chair (metal-made at the old swings and made of massive wood at Charme) trying from all their might of hard essence to molest your back. I have tried around 7 sitting positions and I surrendered, deciding that: I am either an idiot and don?t know how to sit on a chair, or the respective chairs had to have something personal against me and wanted to deprive me of the whole delight I was offered by a nice young lady with an (almost) as sweet quadruped that could be called a doggy if you ignored its cat-like dimensions and hairdo that looked like a medieval wig.
The black-haired young lady was also equipped, apart from the medieval quadruped perfectly matching the Historical Center and a notebook with a webcam and an internet connection, with an amphora-shaped body due to some physical particularities that I will not make public here, this not being a review on the sex-appeal of sweethearts populating Smardan.
Making the situation even more interesting, the quadruped barked with an authoritarian look and made me order grilled tuna with ginger and onion, since I wasn?t going to kiss anybody anyway. I had a fresh and I gazed out the window at the motley people passing by, slowly or not, in front of the restaurant, looking from under covetous eyebrows and turning their heads slightly confused and embarrassed, since most of them will never afford to pay over 40 ron for a dish. And this is not ok, and can be sensed?Class struggle is already a current issue, even if the sly boots with big, fat accounts and multinationals manipulating our minds through commercials and our stomachs among E additives want to convince us that this democracy bullshit is a cheap and high-quality wonder of a soap. Poor people, who have not been so sly as we have in certain moments of our lives, hate us 90%, even when we give them charity. I resign myself to thinking that I am part of the middle class, and that I don?t spend a couple of hundred thousand Euro on a car. If the difference between tens and hundreds can be an excuse? I did it, although I don?t really feel it.
Going back to food: it was excellent and really light, because I chose it from the diet section of the menu ? a big white ball for Charme; I think all restaurants should have in mind an alternative menu. The discreet ginger flavor mixed with thin slices of onion baked in the oven that dresses the tuna well grilled made me forget about both the doggy, and the black-haired amphora reigning in front of me. 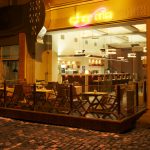